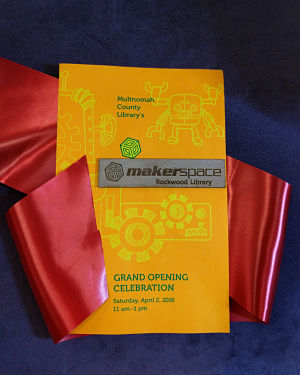 MHCRC Commissioners and staff, along with other community partners and leaders, celebrated the grand opening of the Rockwood Library’s Makerspace on April 2, 2016. The Makerspace is a new, hands-on addition to the Rockwood Library for young people to learn science, technology, engineering, arts and math skills using cutting-edge technology and skilled adult mentors. The MHCRC Community Grants program invested over $300,000 to create a modern and robust place of learning for the youth of Rockwood.

The NW Film Center Hero’s Magnificos Program, also an MHCRC grantee, held its Spring break film camp at the new Rockwood Makerspace. Some of videos made during the camp were screened during the Makerspace celebration. Another great example of community organizations working together to put technology and design skills into the hands of traditionally underserved youth